History of the Library

The City of St. Helena has a long history of public support for library service. As early as 1875 there was movement underway to establish a library. The current building at 1492 Library Lane was constructed in 1979 and named for a much loved local physician, Dr. George Wood and his wife, Elsie. The Woods were also major donors and long time supporters of the library.

The library currently houses over 75,000 books, DVD’s, books on CD, CDs, newspapers, magazines, microfilm and other media. Also part of the library collection is the Napa Valley Wine Library, consisting of some 3,500 titles and over 6,000 items. The world famous Silverado Museum is housed in a wing of the Library Building.

“The St. Helena Public Library's mission is to provide a safe environment, free to all, with opportunities and resources to inspire lifelong learning, reading, discovery, and delight; to provide support for individual and community education and growth; and to connect members of our diverse community through welcoming spaces, outreach, expertise, technology, and innovation.”

Adopted by the St. Helena Library Board of Trustees, April, 2021.

“The St. Helena Public Library seeks to foster the spirit of exploration, lifelong learning, joy of reading, and pursuit of information and knowledge for all and strives to support the growth of the community through education and empowerment.”

Adopted by the St. Helena Library Board of Trustees, April, 2021. 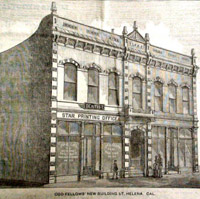 The heritage of the St. Helena Public Library is distinguished by one hundred twenty-seven years of strong local commitment to service. Begun privately as a subscription library by townspeople in 1875, the first library became a city library in 1892 and was housed initially in the Independent Order of Oddfellows Building (IOOF) on Main Street. In 1904, local citizens interested in a more permanent home for the library, contacted library philanthropist Andrew Carnegie, who eventually donated $7500 to construct the first permanent library building in 1908.

Since that time, the City of St. Helena, the Friends of the St. Helena Public Library and many individuals have worked together to provide the best library possible. The present facility was completed in 1979 and enlarged in 1996 with a remodel in 2010. It is named after one of the Library’s most generous benefactors, Dr. George J. Wood, whose generous bequest upon his death has insured the long-term future of the Library.

Remarkable changes have taken place to the Library during the last thirty years. The Napa Valley Wine Library Collection, housed here since 1961, was officially donated in 1972. This rich accumulation of books, journals and documents is unparalleled in its preservation of the history and traditions of winemaking from the 17th century to the present. During the 1980’s the Library forged ahead to meet the demands of the Information Age. Circulation and interlibrary loan functions were automated. In the 1990’s, access to online databases began and public access to the Internet became available. During this period the Library’s participation in the SNAP (Solano/Napa Partners) library network greatly enhanced the availability of books and all other materials.

The St. Helena Public Library is excited about the future and looks with great pride at its past.